Judy’s Mission Ovarian Cancer Foundation  partnered with the Ann and Stephen Kaufman Jewish Book & Arts Festival for the screening of the documentary, “Love, Gilda” on Nov. 4 at the Evelyn Rubenstein JCC’s Kaplan Theatre. The film, which was underwritten by Janet and Elton Lipnick, in honor of Maxine Silberstein, is a true autobiography of the renowned comedienne and original “Saturday Night Live” cast member, Gilda Radner who passed away from ovarian cancer at the age of 42.

Director Lisa Apolito discovered a collection of diaries and personal audio and video tapes documenting Radner’s childhood, comedy career, her relationships, and ultimately her battle with cancer.  Weaving together these found treasures and interviews with friends, such as Chevy Chase, Lorne Michaels, Alan Zweibel and Martin Short, the film portrays the honest and whimsical world of a beloved performer whose greatest role was sharing her story.

Immediately following the film, Judy’s Mission Board Member and board certified gynecologic oncologist, Dr. Pamela T. Soliman, spent a few minutes discussing the signs and symptoms of ovarian cancer and  the increased risk the disease to women of Ashkenazi Jewish heritage.  She also discussed  the importance of championing  your own health  if you feel that something is not right with your body.  Dr. Soliman is a Professor in the Department of Gynecologic Oncology and Reproductive Medicine at MD Anderson Cancer Center.  She is also the Center Medical Director and Deputy Chair of the Gynecologic Medical Center. 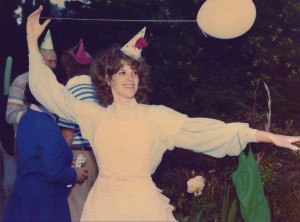