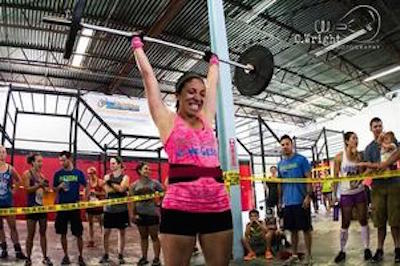 In 2009, due to a mass growing on one ovary, Shae Trainor underwent surgery to remove the mass and ovary during her pregnancy with her second child.  The mass was found to be benign (non-cancerous).  Two years later, while trying to become pregnant for a third child, another mass was found on Shae’s existing ovary.  In January 2012, Shae underwent another surgery to remove the mass, leaving her ovary intact.  After further analysis of the mass, doctors discovered that it was malignant (cancerous), and Shae would have to undergo a total hysterectomy (removal of the ovary, uterus, cervix, lymph nodes and omentum) to contain the spread of cancer.  The surgery was done on February 10, 2012, on the Trainor’s 6th wedding anniversary.  Thankfully, the surgery went well and the cancer was contained in the ovary.

During recovery, Shae discovered CrossFit and began attending classes at CrossFit Enigma.  She has once again fallen in love with exercising and pushing herself to her limits.  Shae has a competitive spirit and a positive attitude and is a perfect example of not letting life’s circumstances dictate her future, besides, who needs ovaries when you have heart.  Her husband, and fellow CrossFitter member says, “Because of CrossFit, I believe Shae has grown physically, mentally and emotionally.  She carries these attributes into her everyday life as a mother, wife and friend.”

Shae is now a certified level one Crossfit coach.  She has also been cancer free for three and a half years!

Be sure to check it out!